Barndominiums are the perfect barn to home conversion, with them being two-in-one living quarters with a garage, shop, or simply a barn area. Basically, they look like a super fancy barn home conversion, and they can be incredibly convenient as well as visually appealing!

These barndominiums are most commonly found in Texas, Oklahoma, Kansas, and Missouri, as this is where they are the most popular. The problem is, the one thing all of these states have in common is that they belong to the Tornado Alley of the United States, which means that they always have to be prepared for a possible tornado. 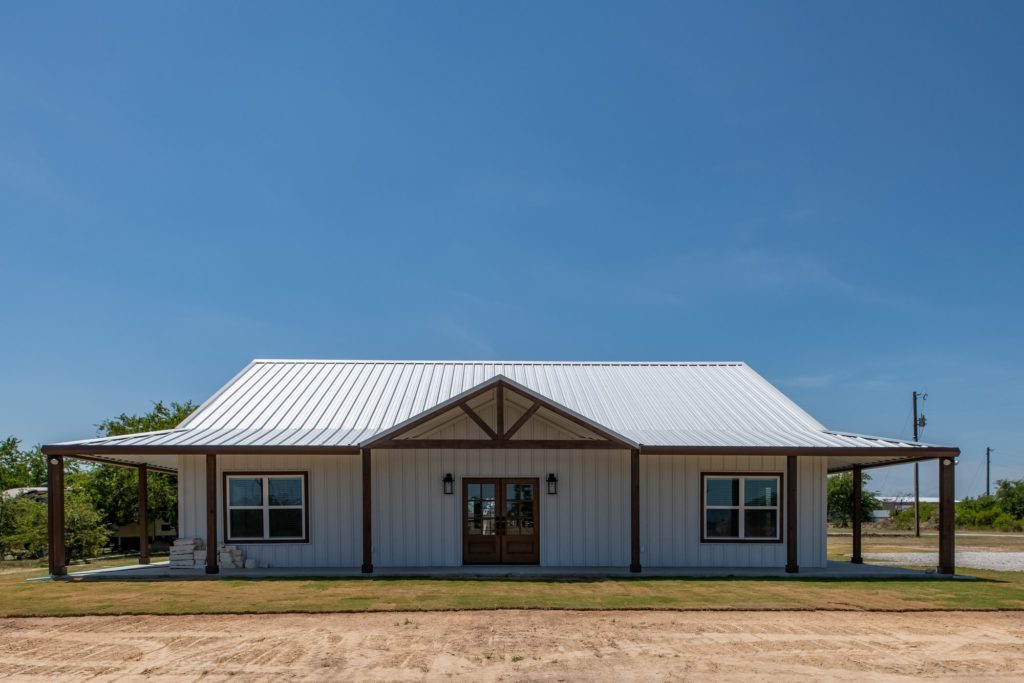 So basically, one of the first questions to ask yourself, before you commit to a barndominium (or any other type of house, building, or structure), is whether it is safe enough in a tornado. Can it withstand a tornado? Will it make it through still standing? If you live in tornado alley, this is an absolute must!

Most barndominiums are built with a metal structure made out of steel, and in the face of a tornado, this is a great plus. Basically, the structure of barndominiums allows them to be highly resistant against different weather conditions, and the steel structure is able to perfectly withstand winds of up to 150 mph.

That is, without suffering from any integral damage to the structure, or to the exterior. (They might then be able to withstand strong winds, but there’s the risk of them suffering some damage).

This impressive wind resistance, showcased by steel barndominiums, allows them to safely withstand up to an F-4 tornado. So essentially, they’re pretty safe in regards to tornados and are therefore a great household choice in the states that they are popular in. (No wonder they thrive in those areas!)

This is also the reason why most rural shelters, especially those designed to withstand tornados, are made with steel structures, as they are the safest and most reliable.

But if your barndominium doesn’t have a steel structure, and instead is made from something weaker, chances are it won’t be as safe to withstand tornadoes.

You can also reinforce a barndominium so that it has an even higher resistance to tornados and other severe weather conditions. And as barndominiums are slightly cheaper to construct than normal houses, you will likely have some leftover budget to build specific tornado-safe shelters on the side, so that you are extra prepared and 100% guaranteed to stay safe in the worst-case scenarios.

What is the life expectancy of a barndominium?

Barndominiums are usually made out of a solid steel structure, making them pretty safe in the case of a tornado, so we know for sure that they’re pretty tough and resistant. But how long can they stay standing for? Or in other words, what is the life expectancy of a barndominium?

On average, a barndominium with a solid steel structure will have a life expectancy of at least 50 years, with it being able to last much longer than that. Meanwhile, barndominiums that are made of wood will be less tough and not as safe, but will be able to have a life expectancy of around a century! That is, as long as it is well looked after and well maintained, of course!

Let’s look at some of the main factors that make barndominiums so safe, tough, and long-lasting:

Although wooden barndominiums have a longer life expectancy, if treated with regular maintenance and well taken care of, steel barndominiums are a lot tougher and a lot more durable in the face of extreme weather conditions and complications.

So if you’re living in tornado alley, for example, it’s a lot more worth it to get a barndominium made out of steel, as the longevity will be longer if you take all of the weather risks into consideration!

Is a barndominium cheaper to build?

It’s easy to think that, considering how safe and durable barndominiums are, they will be more expensive than normal housing, right? Well, that would be wrong! Despite being incredibly tough and convenient in states at risk of extreme weather conditions, barndominiums are actually a lot cheaper to build than regular houses.

As most of the structure is built out of steel, the material costs are around 50% cheaper on average compared to all of the traditional construction materials used in regular houses and other types of buildings.

Also, as most of the steel structure for constructing a barndominium comes already pre-fabricated, they’re around 50% faster to build than other regular houses. So not only is a barndominium cheaper to build, but it’s also a lot faster and will be up and ready in a lot less time!

Of course, this can vary depending on how you’re building the barndominium. If you add extra materials or reinforcements, or you have a rather complicated or extended design, then the material costs and the time needed might increase and might end up being more or less equal to a normal house. But as a general rule, they are cheaper, faster, and incredibly convenient.